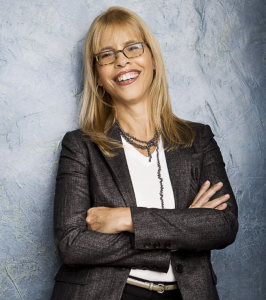 Marjorie Kaplan is leaving Discovery in a rejig that sees UK chief Susanna Dinnage take over running the international content division alongside her existing role in charge of the UK and Ireland Discovery nets.

Kaplan, a 20-year Discovery veteran, was only named president of content, Discovery Networks International last August, and relocated to London to take on the role. She exits at the end of the year.

Discovery recently voiced concern over the UK’s exit from the European Union, with outgoing CFO Andrew Warren recently citing the effects of Brexit for a decline in the company’s international revenues. It said today, however, that the restructuring at DNI will bolster the UK as a production hub for its extensive network of channels around theworld.

The rejig sees the DNI International Content Group folded into the UK and Ireland business, which is run by Susanna Dinnage. Discoverysaid she will develop new genres and formats for the UK and international markets and work with the international programming teams.

Dinnage becomes president and MD, Discovery Networks UK/Ireland. As well as runningDiscovery’s nets in these territories, she will run the international content operation.

“Aligning our London based content creation business with the UK business really underscores our creative and financial commitment to the UK production community,” Dinnage said.

“I am really looking forward to harnessing our own talent and ideas with the innovative production sector in the UK to develop new ideas, talent, genres, formats and funding models that resonate both with UK audiences andacross the globe.”

Kaplan’s role, in part, filled the one vacated by Phil Craig, who left Discovery after just ten months as chief creative officer and has returned to production. Prior to Craig, the international content role was overseen by Luis Silberwasser, who is now running Telemundo.

She outlined her vision for DNI soon after joining, and said she was looking for creator led content.

Discovery is putting a greater emphasis on generating content from Discovery’s many regional bases. Kaplan herself said a centralised structure no longer makes sense for the company.

Kaplan said: “I believe strongly in the power of global content and universal human stories.  Discovery’s international business must prioritize local relevance to best serve international audiences and drive growth, and further leverage its incredibly creative talent around the world.

“As a result, the current central structure doesn’t make sense for the company or for me.  Although this is a bittersweet decision for me, I expect it to also be the start of new adventures as exciting as those I have undertaken while at Discovery.”

Discovery Networks International is run by JB Perrette. “Redeploying resources to the UK team, as well as bolstering the innovative work done by Discovery’s local creative teams worldwide, will ensure a healthy pipeline of content for thecompany’s loved brands around the world,” he said.

“Marjorie is an incredible business leader, widely admired both internally and externally, having transformed multiple businesses at the company and with long-running hit series on virtually all our channels, to her credit. I know she isexcited to seek out an entirely new challenge, but her legacy will remain and she will be missed.”