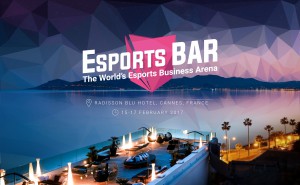 MIPCOM organiser Reed Midem can’t get enough of Cannes. The events firm is launching the Esports BAR (Esports Business Arena) in the southern French town next year, with the Radisson Blu hotel to play host to the event.

A three-day event (February 15-17) will attempt to facilitate relationships between mainstream investors and eSports businesses.

Reed MIDEM claims the event will comprise 100-plus ‘curated’ attendees, 72 hours of networking and 2,000 one-to-one meetings, which will be prescheduled.

eSports – organised gaming tournaments distributed online – have exploded in popularity  with around 115 million unique viewers worldwide, presenting the traditional TV world a new revenue opportunity. According to Newzoo, revenues from the genre will hit US$1 billion globally by 2019.

Mainstream brands such as Coca-Cola, Red Bull and Gillette have invested in the space, with TV companies such as Turner, MTG, Comcast and Lionsgate laying down significant sums to acquire or sponsor existing leagues.

MTG’s executive VP and MTGx Ventures Arnd Benninghoff, who has been a cheerleader for the genre, will comprise an advisory team shaping the event.

Matthieu Dallon, CEO of ESWC and Toornament.com and president of France Esports; Mike Sepso, senior VP of Activision Blizzard in the US; Wouter Sleijffers, chief executive of the UK’s Fnatic’ and H2K Gaming boss Susan Tully in the States make up the rest of the board.

“Many brands and other potential partners have a hard time finding the right contacts to get involved in esports,” said Jerome Delhaye, director of Reed MIDEM’s entertainment division. “Reed Midem wanted to address this – as it has for the music industry, tech, television and the real estate industry – with a dedicated networking experience that will help these kinds of fruitful relationships flourish.”

“We want to create a powerful mix of industry trend-setters and forward-thinkers, all hunting for new partnership opportunities,” he added. “Over 70% of fans are between ages 20-35, a critical period for developing brand loyalty. An industry this powerful and with such potential deserves its own B2B event.”