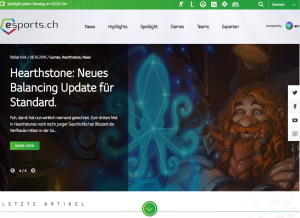 Liberty Global-owned cable operator UPC Switzerland is jumping on the e-sports bandwagon by launching its own dedicated eSports.ch portal.

Citing the statistic that over 750,000 Swiss viewers tune into live streams on leading e-sports service Twitch each month, UPC said it had taken a decision to invest in its own service. The Liberty Global unit has hired a content team of “active eAthletes”, which will provide information tailored to bringing e-sports to a wider public.

UPC has teamed up with local digital marketing agency Blue Glass Interactive to launch the service.

The portal is being launched as part of the wider Connect & Play set of packages introduced by the operator, which are designed to highlight the capabilities of UPC’s high-speed broadband network. The basic Connect & Play 200 offers high-speed internet with speeds of up to 200Mbps, over 140 TV channels including 85 HD services and seven-day catch-up TV and free phone calls within Switzerland. Higher-tier services including 400Mbps internet and 500Mbps internet respectively, along with 180 TV channels, are also available.

“Today we operate the most powerful and future-proof network in Switzerland based on optical fibre cable, which we have built up without public money and in a non-discriminatory manner for urban and rural areas alike. We already have the most customers with a superfast Internet connection in Switzerland. This investment in the network makes an important contribution to the development of an open digital society in Switzerland, from which gamers can also benefit,” said Eric Tveter, UPC Central Europe CEO.