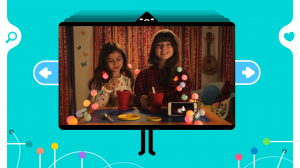 The service is aimed at five-to-nine year-olds – and more specifically, families with iPad tablets. It is also available on iPhones, with Android to follow later this year.

Toca Boca has worked with around 75 independent content creators and MCNs to build a content line-up for the service, which debuted in trial form earlier in Canada, Australia and New Zealand.

Content partners include Freedom!, DreamWorksTV, the kids and family brand of Awesomeness TV, Studio 71, and BroadbandTV.

The project has been spearheaded by former Sesame Street creative director J Milligan as executive producer. “There is a lot around for pre-schoolers. We are [for an age range] after that but before kids have phones or Instagram accounts,” said Milligan, adding that kids in this target age range are not allowed to have their own YouTube accounts and that parents and kids alike are therefore likely to be attracted to a service that provides web-type videos. He said that Toca Boca felt that providing a service for this “tricky age group” presented “a huge opportunity”.

In addition to third-party content from partners, Toca Boca is also providing its own original content based on its popular games, including some live-action videos as well as stop-motion animation shorts.

“The content is intended to be aspirational and inspirational,” said Milligan. “We have thousands of curated videos on it – all these are chosen by us. We have arrangements with four big MCNs and we’ve gone for specific videos from those. We also have indie content channels associated with us.”

Milligan said that Toca Boca plans to launch the service globally, except in China.

Milligan said the platform could be personalised by its young viewers, with the ability to tailor the look of the portal to individual taste. The service includes a recommendation engine. Categories include DIY, gaming, science and discovery, funny videos and music.

The service also features tools to enable users to make their own video shorts. “We also have creation tools and platforms – something that no-one [else] has done yet in an integrated way,” said Milligan.