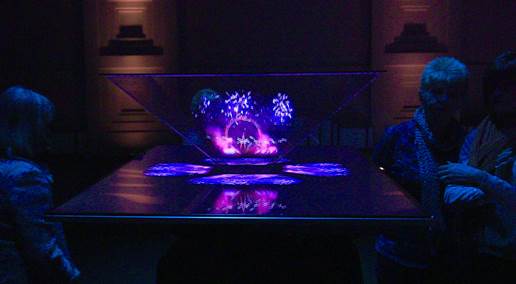 The BBC has created an experimental ‘holographic’ TV as part of its exploration of emerging technologies for future audiences.

Describing the project, the BBC said that the device was designed to assess how the ‘floating’ images of augmented and mixed reality devices might be used to view BBC content in years to come.

The BBC built the “low-fi and low-cost” device using a 46-inch TV and a custom-made acrylic pyramid to create, what it described as, a modern-day version of “an old Victorian theatre technique” to produce the illusion of holographic-style images.

The public broadcaster then enlisted the help of UK-based visual effects and hologram specialist MDH Hologram to format and adjust BBC archive footage to work effectively in this medium.

“Our experiment was fairly simplistic, but the new technologies on the horizon have the potential to completely change the way that audiences experience media content in the future,” said BBC head of digital partnerships, Cyrus Saihan.

“You can imagine a world where instead of watching a film star being interviewed on the sofa of a TV chat show, they feel as if they are sitting right next to you on your own sofa in your living room, or where instead of looking at a 2D image of Mount Everest, it appears as if the snow on the mountain top is falling around you.”

“If devices such as Microsoft’s HoloLens and the Google-backed Magic Leap also capture the public’s imagination, we could soon find ourselves in a situation where the lines between digital content and the real world become increasingly blurred,” he said.

The news comes after the BBC in June unveiled its first “true VR” pieces of content, marking a step forward its experiments with virtual reality technology.