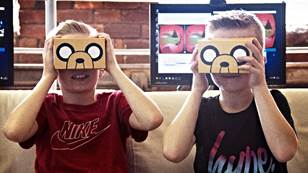 Turner-owned Cartoon Network is to launch a new virtual reality mobile game and branded VR viewer based on the Adventure Time animated series.

The I See Ooo game and viewer will be launched in the UK and Nordic markets on September 29, available exclusively through a promotion with Google Play.

The game features many of the show’s characters. Players can immerse themselves in an original story set in the Land of Ooo and play three different variants, each with 20 levels and varying degrees of difficulty, according to Turner.

The Jake the Dog-branded viewer that is being launched to accompany I See Ooo can also be used to view other virtual reality mobile games.

Developed by UK-based VR specialist Opposable, the experience includes two games: Glider Flight and Snowball Fight, with a third game, Puzzle Path, to be made available as a free downloadable content pack shortly after launch.

Each game offers 20 levels alongside 14 characters and original music from the show. The I See Ooo mobile game will also be available to download from the Google Play store.

The game will be made available via a download code in each viewer box, and will be sold through the Forbidden Planet and pyramidshop.com retail outlets priced at £24.99.

Patricia Hidalgo, chief content officer, kids, Turner EMEA  and international kids strategy said: “At Turner we are committed to creating and developing the best content for audiences and ensuring that our viewers are able to experience our brands across multiple platforms, windows and devices. This comprehensive, immersive new VR experience for Adventure Time is an excellent example of how we are continually looking to innovate and offer fans new ways to interact with their favourite shows and characters – and on a deeper level than ever before.”

Johanne Broadfield, VP, Cartoon Network Enterprises, Turner EMEA said: “I can’t think of a more perfect show to highlight this exciting new technology than the quirky and unpredictable Adventure Time. Its licensing potential and social currency gives us so much scope when creating new ways for fans to play and interact with the brand – and, in this instance, we have an amazing, one-of-a-kind offering that not only allows kids to try out virtual reality gaming but also gives them the chance to become Jake the Dog with a fully customised VR viewer.”