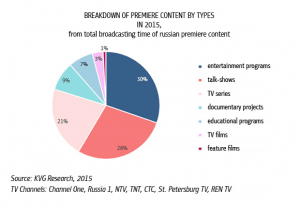 Entertainment programming and talk shows made up half of the total Russian premiere shows, with talk shows up 10% on 2014 and entertainment down 10%.

Feature films increased 28%, while telemovies dipped 4%. Kids content was up 17% and other types programming fell. TV series, which include drama and comedy, were significantly down 33%.

The total value of the premieres across the seven networks was 40.3 billion rubles (US$622.1 million), which is 9% down on the 2014 figure. Some channels had reduced the volume of premieres, while others have replaced more costly programming with cheaper fare.

On the production front, Solaris Promo Production lead the way, producing 930 hours primarily for TNT. Red Square, which produces for Channel One and Russia 1, saw a 25% dip, but wasstill second with 910 hours.

Novaya Compania (568 hours), PPK (466 hours) and MB – Group/M Production (446 hours) rounded out the top five.
Comedy Club Production dropped 77%, primarily because Solaris replaced it as producer of reality series Dom-2. Mir Reality, which is part-owned by Talpa Media, fell from third spot to eighth, due to a significant reduction in the number of new episodes for Ren TV.

KVG’s research also showed TV advertising revenues had fallen 14% year-on-year, coming in at 136.7 billion rubles. However, it has interviewed a number of “market participants”, who are predicting better numbers in 2016.

Reps for networks and production companies said they expected a stabilising of “crisis events” – likely referencing Russia’s conflict with neighbour Ukraine, which had meant a “sharp decline” in 2014 and a “further decrease” last year.

Furthermore, a small increase in prices from 5% to 10% has been predicted.

KVG is part of the Key Vision Group, which analyses Russian television and video-on-demand players.