Now TV: Game of Thrones gets triple the views of any other show 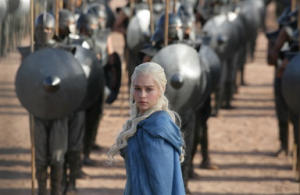 HBO’s Game of Thrones, which airs on Sky Atlantic in the UK and is available on Now TV.

Speaking on a panel named ‘What do audiences really want? The truth about changing TV consumption’, Now TV’s strategy and proposition director, James Alexander, said while some individual movies can return similar viewing figures, Game of Thrones dominates when it comes to return-viewer numbers.

“Game of Thrones is the most popular series of all time from Now TV’s perspective by a long way. It’s probably at least three times the audience in terms of any other single show,” said Alexander.

Discussing a number of TV industry ‘myths’ – including whether or not Game of Thrones is the most popular show of all time – the Now TV executive rejected the idea that Netflix is killing pay TV, describing the rival service as “complimentary” to Now TV.

“We don’t see Netflix as a competitor. Half of our customers are also consuming Netflix. These things co-exist in a positive way. But it goes back to what is Netflix? It’s just another channel in a different guise. It is pay TV, it’s not killing it,” said Alexander.

Speaking on the same panel, David Bunker, head of projects, BBC Audiences said that while Sky and Virgin are in a stable position in the UK pay TV market, the availability of over-the-top services gives viewers even more choice of content.

However, asked whether the industry had reached a point of ‘peak linear channels’, Bunker said that smaller channels towards the end of the electronic programming guide are being “eroded by video-on-demand, because video-on-demand is a much better way of getting to that content”.

On the topic of whether “TV is doomed” Niko Waesche, global industry head, media and entertainment, GfK UK, said that the shrinking of the music industry from its late ’90s peak to where it is today should be cautionary tale for the television sector: “We will still have linear TV, but it’s just not going to be like in the past.”

Alexander disagreed, stating that technology is simply offering viewers a better experience. “I’m not sure it [TV] is doomed per say, but I think we are moving to a world where it’s a hybrid model,” he said.