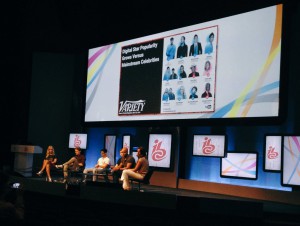 The average YouTube viewing session now lasts for over 40 minutes – up more than 50% year-on-year – as the platform continues to evolve from a short-form video service, according to YouTube executive Ben Speas.

Speaking on a panel titled ‘Harnessing the Power of Influencers’ at IBC this morning, Speas, YouTube’s content solutions lead for Northern Europe, said that overall YouTube watch time is up 60% year-on-year, driven by mobile consumption

“We’re now starting to see the shift from bitesized content. So YouTube is not the platform for 30 second or two minute videos. People are coming on there and replacing their TV session with YouTube,” said Speas.

He also pointed to claims that YouTube creators are also now more significant than mainstream celebrities, citing a 2014 Variety survey that found that the five most influential figures among Americans aged 13-18 were all YouTubers.

“A lot of millennials are saying that they can relate to YouTube creators better than they can their friends and they’re really using that comment section underneath the videos to have this two-way interaction with people.”

Despite this, the YouTube exec said that TV is “far from dead” and “the big screen is still the centre of the home”.

Asked about the future prospects for traditional television, he said: “The viewership patterns have changed and they’re starting to complement each other. I think TV just has to be smart with how it connects with the broader audience in order to fulfil that loop.”