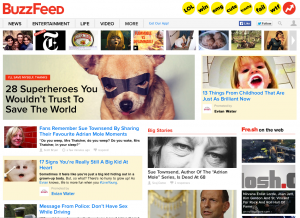 BuzzFeed is dividing itself into News and Entertainment divisions, as part of restructure that will see it expand its digital video output.

According to an internal memo from BuzzFeed CEO, Jonah Peretti, a new BuzzFeed Entertainment Group (BFEG) will “provide an umbrella for all our entertainment content”, while an expanded BuzzFeed News (BFN) will encompass the work that is “rooted in reporting and journalistic independence – on topics both serious and fun”.

“In this new structure, video won’t be the job of just one department. Having a single ‘video department’ in 2016 makes about as much sense as having a ‘mobile department’,” said Peretti.

“Instead, it will be something we expand and embed across the organisation. As digital video becomes ubiquitous, every major initiative at BuzzFeed around the world will find an expression as video, just like everything we do works on mobile and social platforms.”

As part of the move, the BuzzFeed boss said that the company will not organise itself around a specific “format or technology” but will try to take advantage of all of these – including short and long form video, posts, lists, quizzes and ‘micro-content’.

BFN will be run by BuzzFeed editor in chief, Ben Smith and will include existing editorial groups, including BuzzFeed’s health team and its global news operation – which includes beat reporters, its breaking news team, investigative reporters, and foreign correspondents.

BFEG will be led by BuzzFeed Motion Pictures president, Ze Frank, who, in his new role as pesident of BuzzFeed Entertainment Group, will no longer focus exclusively on video.

“This structure will allow us to be better at entertainment and better at news,” said Peretti.

“It will also complete our shift to becoming a cross-platform media company, with entertainment and news both living on our site, our apps, and distributed on platforms across the web in multiple native formats.”