Facebook taking on Snapchat and looking to video with Lifestage 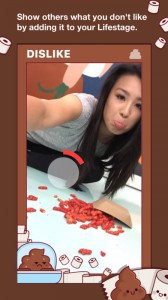 Facebook has taken another step along the path to becoming more video and photo-centric by launching Lifestage, a new iOS app aimed at – and restricted to – teenagers and near-teenagers that seems designed to take on rival platform Snapchat.

The app, created by Facebook wunderkind Michael Sayman, is available for iOS devices without the need for a Facebook account. Users can load videos of themselves in different emotional states and engaged in various activities, turning the clips into a video profile that can be followed by others.

Users over the age of 22 will not be permitted to see others’ videos. The information about the app in the iTunes store carries the warning that posts are “always public and viewable by everyone, inside and outside your school” and that there is “no way to limit the audience” of videos.

The app is aimed at those still at school. Users choose their own school and can see video profiles of their classmates and those from nearby schools. The app is only usable when 20 people from the same school sign up.

The app does not include messaging capability, but users can add a line of text providing a link to another app or contact information for this purpose.

Facebook is focusing heavily on developing itself as a video platform. The social networking site is facing intense competition for the attention of younger users from newer entrants including Snapchat and Instagram.