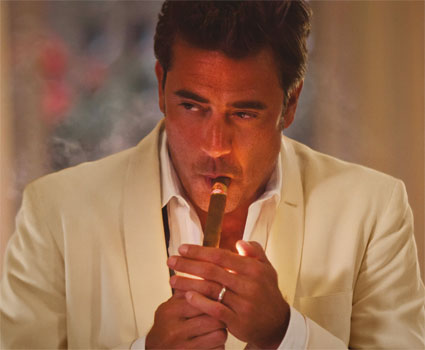 This comes after the announcement of a major push into original drama programming with its cousin, All3Media. This places it more directly in competition with pay TV rivals Sky and BT, and SVOD player Netflix, although it offers content from these and considers itself primarily as an aggregator.

Magic City, meanwhile, becomes Virgin’s third UK-exclusive US programme following a deal with Starz, after another with Starz for Ash Vs Evil Dead and another with Endemol Shine International for Kingdom. The series (pictured) ran on Starz, which is connected to Virgin Media through Liberty Global chairman John Malone, for two seasons.

Virgin Media’s chief digital entertainment officer, David Bouchier, told TBI that Avalon was in Edinburgh this month at the Fringe Festival filming the 15 shorts that would comprise Edinburgh Comedy Shorts, which will be released exclusively on its streaming TV Anywhere  services.

“We are dependent on, and get the benefit from our content partners, but there is an opportunity for us to do exclusive content in a targeted way that only our subscribers get,” said Bouchier. “It’s not something we’ve been associated with recently, and we need to get into it. However, we don’t need to drop tens of millions on it.”

“Avalon is the UK’s foremost comedy producer, and that’s why it is in Edinburgh creating the shorts for us,” he added.

The shorts will debut on Virgin Media’s streaming service, which is powered by its super-fast internet infrastructure, for a month. “This is important because it makes our streaming service a destination to go to, and increases the audience.”

Bouchier said the company would also look at co-productions for big-budget programming, which will go alongside the exclusive dramas it gets from the Liberty-All3Media output agreement, and is dipping its “toe in the water commissioning” for short-form exclusives.

Bouchier was drafted in last year to create Virgin Media’s content strategy. He has since hired former Channel 4 buyer Gill Hay as acquisitions chief and David Twallin as head of programming.