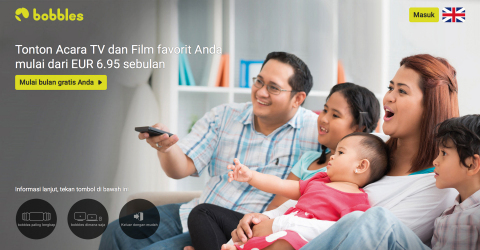 Hamburg-based Bubbles Media has launched Bobbles.tv, a new satellite and OTT-delivered pay TV service with bouquets aimed at Chinese and Indonesian expatriates living in Europe, with services targeting Korean and Vietnamese speakers to follow in November.

Versions of both the Chinese and Indonesian services are available on SES’s Astra satellite platform at 19.2° East, with more extensive offerings available on the web. Subscribers can purchase a Bobbles.tv smartcard to view either service, and both are available in Belgium, France, Germany, Greece, Italy, Luxembourg, the Netherlands, Austria, Portugal, Spain, Switzerland and the UK.

An expanded version with 18 channels is available via OTT, along with a catch-up service, viewable via PCs, tablets and smartphones.

The service, which is available for €14.95 a month, includes general and specialist channels spanning movies, series, educational and factual programming, with other channels set to join in the future.

“As more and more Chinese are living abroad, for various reasons, the ability to keep up with their favourite TV programmes is nearly impossible. The partnership between Dopool and bobbles.tv will bring the comforts of home to Chinese – wherever they may be,” said Chris Zhang, founder and CEO of Dopool International.

As is the case with the Chinese option, an expanded version of the Indonesian bouquet is available via OTT as well as satellite, comprising seven channels –  and DMCtv.– available for €6.95. A catch-up option is not currently available, but Bubbles Media says that one will be launched later.

The Indonesian service is being launched in partnership with MNC Media, which owns a catalogue of about 265,000 hours of content.

Arnold Kulbatzki, founder and CEO of Bobbles.tv said: “Bobbles.tv offers international communities a convenient way to receive their favourite TV channels anywhere in Europe – via satellite or over the internet, live or as catch-up TV using media libraries. Bobbles.tv customers only pay for the programming that they are really interested in: attractive television from their home countries. A single subscription grants access to almost every relevant TV channel from home.”

Bubbles Media, based in Hamburg, has a staff of 15, primarily comprising native speakers from the communities that the service is targeting.

Kulbatzki was previously executive partner at A2B Media GmbH and founder and member of the board at Mallorca, Spain-based call centre operator CCES24. Co-founder Torsten Rossmann was partner of the news and documentary broadcaster N24 and is managing director of WeltN24 GmbH, a subsidiary of Axel Springer, Germany.