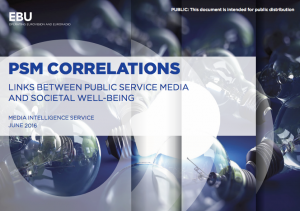 Strong public service media goes hand-in-hand with signs of a healthy democracy, according to new research by the European Broadcasting Union (EBU).

Based on data from 25 European countries, the EBU research said that radio and TV remain the most trusted media sources for European citizens with 55% saying they tend to trust radio and 48% saying the same about TV.

The written press, internet and social media recorded much lower levels of trust, with just 20% of people saying they trust social media.

“A strong and well-funded public service media is not only about providing people with news, documentaries and entertainment – it’s also about contributing to democracy. While we can’t say that strong public TV and radio directly leads to greater democracy and less corruption, we have been able to show, for the first time, how these factors are connected,” said the head of the EBU Media Intelligence Service, Roberto Suárez Candel.

“People maintain a strong relationship with radio and TV, which are still their primary sources of information and entertainment.  It is also not surprising that in countries with a high level of funding for public service TV and radio there tends to be more trust in the media in general – they produce good quality content and provide valuable information for society.”