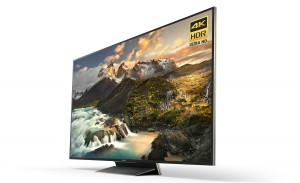 Sony has unveiled its new Z series of 4K, ultra HD (UHD), high dynamic range (HDR) TVs, in what it claims is a “significant leap forward” in display technology.

“The Z series is a generational advance in TV technology, which brings the 4K HDR viewing experience to a whole new level. Our best and brightest HDR Ultra HD television is proof of Sony’s continuing commitment to deliver the ultimate home entertainment experiences to our customers,” said Mike Fasulo, president and COO of Sony Electronics.

“With expertise in both the creative and the technical aspects of 4K HDR shooting, editing, recording, transmission and display, Sony understands 4K HDR like no other company. The Z series is a direct result of that unique partnership between our engineering and creative teams.”