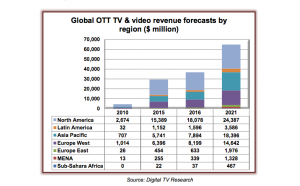 The Digital TV Research stats claim that of the US$35.37 billion in extra revenues between 2015 and 2021, Asia Pacific will contribute US$12.65 billion, North America US$9.00 billion and Western Europe US$8.25 billion.

“The US will remain the dominant territory for online TV and video revenues – which will rise by US$8.24 billion to $22.82 billion between 2015 and 2021. China will add a further US$6.24 billion, with its total revenues nearly quintupling over the period to give it second place,” according to the research.

Subscription VOD is tipped to become the biggest over-the-top revenue source by 2018, but advertising-based VOD will regain the top position by 2020.

“Mobile SVOD is growing rapidly in Asia – and will do so in the Middle East and Africa. Mobile broadband is more established than fixed broadband in many developing countries,” said Simon Murray, principal analyst at Digital TV Research.