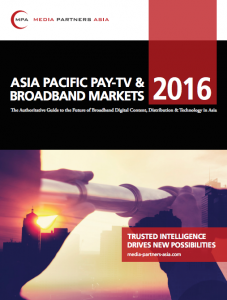 The Asia Pacific pay TV market will grow at a 5.8% average annual rate from 2016 to 2021, according to research by Media Partners Asia (MPA).

The research firm’s ‘Asia Pacific Pay TV & Broadband Markets’ report predicts that pay TV industry sales across 18 major markets in Asia Pacific will climb from US$54 billion in 2016 to US$72 billion by 2021.

However, it says that the pace of pay TV subscribers and revenue growth is slowing, weakened by “an economic slowdown and increasing competition from both legal and illegal alternatives”.

MPA said that subscriber growth “declined or substantially decelerated” in particular in Hong Kong, Indonesia, Malaysia and Singapore, but claimed that India and Korea remain two of the region’s largest and most scalable pay TV opportunities.

Subscription video-on-demand services have had a negligible impact on pay TV so far, despite the global launch of Netflix earlier this year and increasing competition from regional and local SVOD services, according to the research.

“Sports, kids, infotainment and Hollywood movies will remain mainstays of the pay TV bundle, although channels offering Hollywood TV series are being disrupted by both legal and illegal OTT. Few pay TV operators have been able to capture or monetise large-scale online video viewing so far, although early results in Hong Kong and Korea are encouraging.”