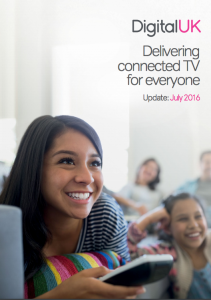 The clearance of Freeview channels from the 700MHz spectrum band is expected to be unaffected by the UK’s decision to leave the EU, according to Digital UK.

In its annual update report on digital terrestrial television, Digital UK chair Caroline Thomson said that work has already begun to ensure the transition is completed “on time and as smoothly as possible”.

“Digital UK is now working with Ofcom and [the] government on the clearance of Freeview channels from the 700MHz spectrum band, which is due to be cleared across most of Europe by 2020. Despite the EU referendum result in June, we expect these changes to go ahead as planned,” said Thomson.

“The project will require complex re-engineering at more than a thousand transmitters across the UK and will also affect equipment used in the Programme Making and Special Events (PMSE) industry,” said Macefield.

Digital UK said that for most people, the reallocation will mean that most people will simply need to retune their TV equipment. However, it said there is a risk that some viewers “could lose some or all of their services when Freeview channels move to new frequencies.”

“In some of these cases, aerial adjustment or replacement may be required to restore the full channel line-up,” said Digital UK operations director, Michelle Brownrigg.

UK broadcast regulator Ofcom set out plans in March to clear the 700 MHz spectrum band, which is currently used for digital terrestrial television, by no later than the second quarter of 2020. The spectrum will be reallocated to mobile use and will pave the way for 5G services.

Digital UK is owned by the BBC, ITV, Channel 4 and Arqiva and supports the UK’s terrestrial TV service. The company provides operational support for the Freeview platform, including management of the electronic programme guide, and led the technical development of the Freeview Play platform.

It also leads on developing DTT strategy, working with broadcast partners and industry, and provides viewers with information and advice about terrestrial TV channels, services and reception.