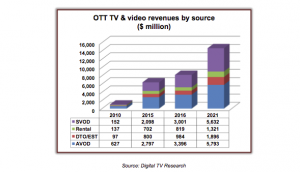 Over-the-top (OTT) TV and video revenues in Western Europea will more than double between 2015 and 2021, according to Digital TV Research.

Of this additional US$8.25 billion in revenue, the UK will contribute US$2.30 billion and will “remain the market leader by some distance”.

Second-place Germany will account for an extra US$1.34 billion, third place France will contribute $1.13 billion, while Italy will provide $0.99 billion.

“OTT adoption is already high in Scandinavia, the Netherlands and the UK, but it has been much more muted in other countries such as France, Spain and Portugal,” said Digital TV Research principal analyst, Simon Murray.

Subscription video-on-demand will become Western Europe’s largest revenue source in 2018 but ad-supported VOD will “regain its crown” in 2020, according to the predictions.

By 2021, Digital TV Research estimates that SVOD revenues will total US$5.63 billion and AVOD will bring in US$5.79 billion.

The number of SVOD subscriptions are tipped to reach 53.7 million by 2021, up from an expected 31.4 million by the end of 2016, with 30.7% of the region’s TV households expected to subscribe to a SVOD package by this date.

“Sweden will have more SVOD subscribers than Spain in 2021, despite only having a quarter of the population. Despite this, the number of subscriptions will quadruple in France and Italy between 2015 and 2021 and will grow eightfold in Spain,” according to the research.