Quarter of US TV homes now without pay TV 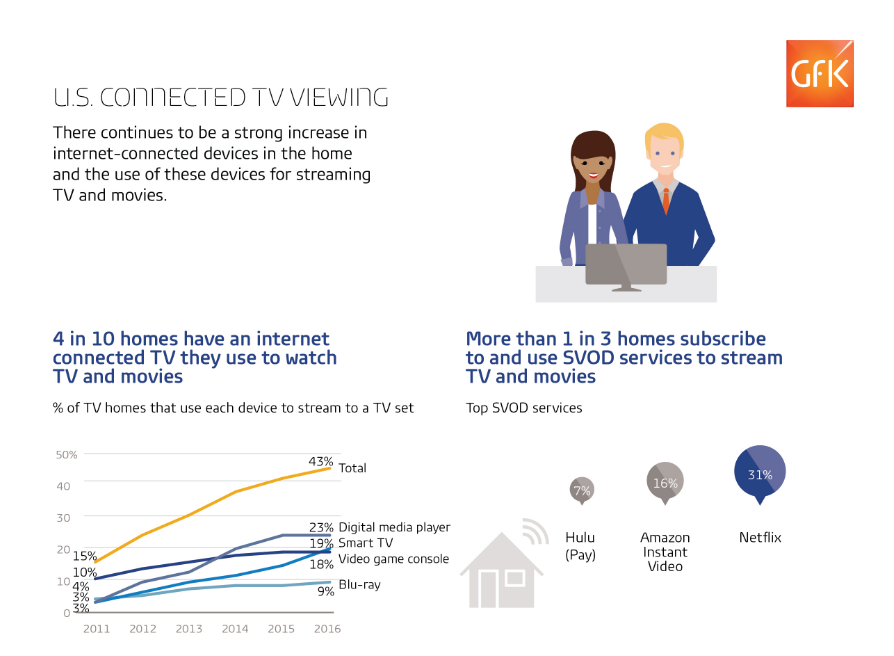 One quarter of US TV households now go without a cable or satellite pay TV subscription, according to research by GfK.

According to GfK’s 2016 Ownership and Trend Report, part of its Home Technology Monitor, 17% of US TV homes now rely on over-the-air broadcast reception, up from 15% last year, while 6% only use internet TV services such as Netflix, Amazon Prime, Hulu or YouTube and have no broadcast or pay TV reception at all. The latter figure has increased from 4% last year.

The trend is accentuated among younger viewers. For TV homes with a resident between 18 and 34 years old, 22% are using over-the-air reception only, while 13% are only watching internet TV. In total, 38% of households with an 18-34 year-old resident rely on some kind of alternative TV reception or video source to traditional pay TV, against 25% of all homes.

Households with at least one resident over 50 are more likely to take cable or satellite services, with 82% taking a pay TV subscription. Forty-six per cent of these homes pay for a cable service, versus a US average of 41%.

High-income households, meaning those earning over US$50,000 are more likely to take satellite TV than the average, with 27% of these homes taking a satellite service against a US average of 21%.

The comparable figures for the overall population are an income of US$65,000, with 36% taking SVoD, 43% being active OTT-on-TV users and 31% having children.

According to GfK, four in 10 homes have an internet connected TV they use to watch TV and movies, with 23% connecting via some kind of digital media player, 19% via a smart TV portal, 18% via a video game console and 9% via a Blu-ray player.

Thirty-one per cent of US homes take Netflix, with 16% taking Amazon Instant Video and 7% taking Hulu’s pay service, according to the research group.

“The fact that a statistically significant increase in broadcast-only reception occurred over just one year may be further proof that the cord-cutting/cord-never phenomenon is accelerating,” said David Tice, SVP in GfK’s Media & Entertainment practice.

“If you include homes that have no TVs at all – about 3% of all households – then less than three quarters – 73% – of US homes continue to have pay TV service, with the attendant implications for all stakeholders – not just the pay TV services themselves, but also networks, content providers, and advertisers.”