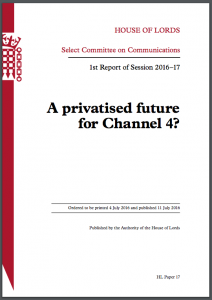 A report into the future of Channel 4 has concluded the risks associated with the mooted privatisation of the UK public broadcaster outweigh the potential benefits.

The House of Lords, the UK’s upper house, came to that conclusion in its ‘A Privatised Future for Channel 4?‘ report, published today.

The House of Lords select committee on communications said that the broadcaster is sustainable in its current ad-supported form. It added that privatisation risks include seeing its public service remit diminished to maximise profit, regional commissioning and diversity threatened, and news, current affairs and film output particularly at risk.

UK culture secretary John Whittingdale gave evidence to the committee, arguing that all options remain on the table, but that with its current ownership model, Channel 4 is vulnerable to downturns in the advertising market.

He said: “There is an argument that Channel 4 will have a stronger future if it has a private sector partner, either in part or in whole, that has deep pockets and is willing to invest in the growth of the business.”

The Conservative minister added that a Channel 4 owned in full or part privately could make it a better run organisation. “There is a view that the business can be grown, that it can be run more efficiently and that in itself will reduce costs,” he said, adding that he had spoken with a large number of media companies and there was “no shortage of potential interest”.

The committee’s 30 key recommendations and conclusions, meanwhile, were largely at odds with Whittingdale’s view, and included finding that Channel 4 is ‘well positioned to continue to serve its target demographic across all platforms and to add significant digital revenues’.

It also raised the prospect of a prospective private owner walking away from Channel 4’s public service obligations, a situation it said that comms regulator Ofcom would be powerless to prevent.

The report said: “Once a company has passed into private ownership it is very difficult to control what subsequently happens to it, as demonstrated by the issues currently facing Viacom, Channel 5’s owner.”

Attempts by a private owner to achieve cost savings through in-house production would also have industry-wide implications, according to the report.

The committee also found, as many inside the kids industry have argued, that Channel 4 is failing to adequately programme for older children, as required by its licence.

As well as painting a broadly negative picture of a privatised Channel 4, the House of Lords committee said other plans such as a mutualisation, or part-privatisaton, would also have negative outcomes for the broadcaster and wider sector.

“We have concluded that the risks and uncertainties of these approaches outweigh possible benefits for C4C and the creative industries of the UK,” it said. “The Committee sees no substantive argument for changing the ownership of C4C.”