Netflix is now the most watched on-demand video service in the US, beating YouTube into second place, according to new research.

Ampere Analysis, which measured the proportion of people interacting with a given service over the past month, says Netflix now has a 47% share of streaming eyeballs in the US, ahead of YouTube with 42%.

The picture in the US contrasts with that of elsewhere, with YouTube on top in the other countries measured in the Ampere research.

In the UK, YouTube had a 43% share among the most-watched on-demand services, with the BBC’s iPlayer second with 36%, and Netflix third with 20%. 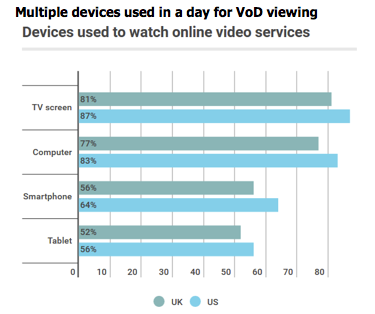 The research also shows how people consume on-demand video. They often catch up on TV on a smart phone while commuting, before switching to bigger TV or computer screens later.

In terms of what is being watched there is a distinction between the US and UK, with comedy top in the States and sci-fi and fantasy winning out among the Brits.

Richard Broughton, Research Director at Ampere Analysis, said: “Although broadcaster-led free online video services are prominent in the UK, exclusive series on subscription services like Netflix and Amazon Prime are driving willingness to pay for content, and over time this will penetrate the older viewer population who have traditionally been reluctant to spend online.”

He added: “Furthermore, despite the fact that people can watch content on a number of devices, it is the larger TV screens that attract the most eyeballs in both markets for video on demand, and that’s even the case for the heaviest viewers – illustrating that despite the growth in app-based viewing on mobile devices, ensuring good quality of experience on connected TV devices and Smart TVs remains crucial.”