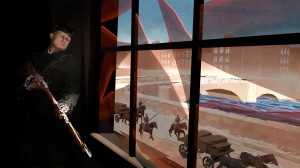 Easter Rising: Voice of a Rebel

The BBC has unveiled its first “true VR” pieces of content, marking a step forward in the UK public broadcaster’s experiments with the technology.

The BBC posted a number of its Virtual Reality experiments to BBC Taster, its platform for experimental ideas, ahead of their premiere at Sheffield Doc Fest, with more projects set to follow.

In a blog post detailing its work in this area, Andy Conroy, controller of BBC Research and Development, said that ‘true VR’ relates to virtual reality worlds that are interactive and can “react to some degree to what you do” – such as where you look and where you move your hands.

This marks a distinction with the several pieces of 360-degree that the BBC has previously published, with each of the new projects designed to address challenges that will provide “invaluable insights for the organisation now and in the future,” according to Conroy.

Available now on BBC Taster is We Wait, a BBC R&D and Aardman Studios co-production that uses the real stories of refugees as the basis for an animated virtual experience. This project was built for the Oculus Rift VR headset.

Also available for Oculus is Easter Rising: Voice of a Rebel. BBC R&D worked on this project with BBC Learning, Crossover Labs and VR specialists VRTOV, producing a “new form of history documentary” that uses VR to present historical events from the perspective of their protagonists.

Two other ‘true VR’ projects that will be available soon are: Home – A VR Spacewalk, a collaboration between BBC Science, BBC Learning, BBC Digital Storytelling and VR studio Rewind that was built for the HTC Vive VR headset; and The Turning Forest, a fairy tale created with VRTOV, which has used R&D technology to create “incredibly realistic 3D sound”.

Two 360-degree BBC projects that are also available now on BBC Taster are: Rome’s Invisible City VR, which takes audiences on a tour of Rome’s Pantheon; and Trooping the Colour, a 360-degree “Queen’s eye view” of what the British monarch will see as part of her 90th birthday celebrations. Both projects were built for viewing in a web browser, or through smartphones VR headsets like Google Cardboard.

“This is all part of the BBC’s early experimentation to help us better understand emerging technology and new mediums, explore the potential for future audiences, and see what kind of role the BBC should, or shouldn’t, be playing,” said Will Saunders, editorial lead for BBC Taster.

“In terms of the technology, the main difference is that VR is more interactive and immersive than 360 degree video, which is very much as it sounds – a video played out in 360 degrees around the viewer.  However, both have the potential to give viewers a sense of presence.

“This is interesting to us as programme makers as it can help make people feel like they’re at the heart of the action or the story, which could help future audiences better understand important current affairs, news, science and history topics or give them a new perspective.”