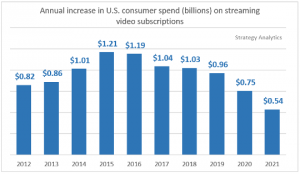 The US video streaming market is showing the first signs that it is “approaching saturation”, according to a new forecast by Strategy Analytics.

The research firm claims that the dollar increase in spend by US consumers on services like Netflix, Amazon Prime and Hulu in 2016 will be lower than in 2015 – indicating the market is slowing for the first time.

Commenting on the research, Strategy Analytics’ digital media director, Michael Goodman, said that the incremental increase in US video streaming will “decline from here on”.

“Although the change in increase is relatively small, its direction is extremely significant. It shows that, whilst actual market saturation is a few years off yet, the domestic US streaming subscription market is now on the backside of the adoption curve.”

Overall, Strategy Analytics predicts that nearly 60% of US broadband households subscribe to a video streaming service and estimates market saturation to be at 85% of broadband homes – similar to saturation levels for pay TV.

It said that within five years, annual growth rates will fall below 8%, compared to predicted growth of 22% this year.

Netflix continues to lead the US SVOD space, accounting for 53% of subscriptions, compared to 25% for Amazon Prime Video and 13% for Hulu. Nearly 40% of homes subscribe to at least two services.

“This multi-subscription behaviour means growth relies on cannibalising other services or getting people to subscribe to more than one – and companies seem to be betting on the latter,” said Goodman.

“Most of the new services being launched today are in the US$2-US$5 range – clearly designed to be complementary to a Netflix or Amazon. The domestic situation is also a huge reason why international expansion is so important, this is underscored by Amazon’s recent video initiatives, and is particularly relevant for Netflix who has the least room to grow in the US”

According to Strategy Analytics, SVOD will account for 35% of US consumer spend on home video this year, compared to 30% on purchased DVDs or Blu-rays and 10% on disk rentals. Downloads-to-buy and downloads-to-rent bring in the least amount of revenue.

REMINDER: Complete the survey "The UI and the customer: editorialisation, personalisation and engagement" by Octobe… twitter.com/i/web/status/1…
22 October 2020 @ 12:30:00 UTC