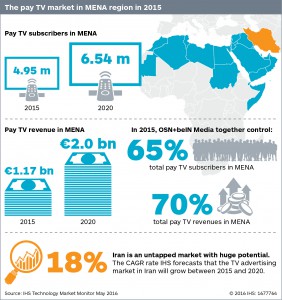 The number of pay TV homes in the Middle East and North Africa (MENA) region jumped 10% last year and revenues passed €1 billion for the first time, according to IHS.

The research firm’s ‘Middle East and North Africa Pay TV Market Monitor’ report said the number of pay TV homes in the region climbed to 4.95 million in 2015 and will grow further in the coming years.

IHS forecast that MENA pay TV subscriber numbers will increase to 6.54 million by the end of 2020, marking a 32% increase on the end of 2015 and representing a compound annual growth rate of 6% over the five-year period.

MENA pay TV revenues grew 37% year-on-year in 2015 to €1.17 billion and IHS forecasts this to continue to rise to “just over €2 billion” in the next five years.

“Pay TV in the Middle East and North Africa region is growing rapidly and faster than any other region we analyse,” said IHS Technology senior analyst, Constantinos Papavassilopoulos.

The report also noted that Iran is a market that is providing a “wealth of opportunities” for regional operators. Having previously been a “largely untapped market for pay TV business,” IHS said that 71% of TV households in Tehran now have a satellite dish.