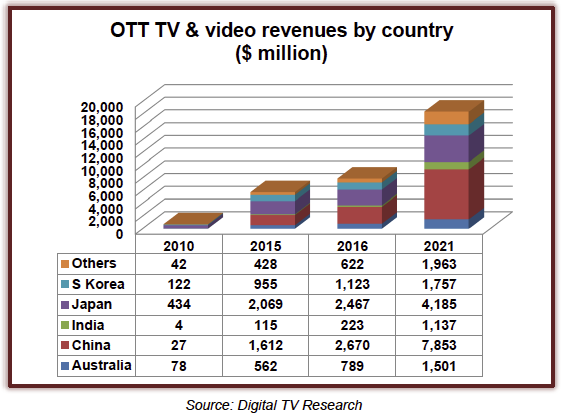 OTT TV and video revenues in the Asia Pacific region are set to rocket to US$18.4 billion over the next five years, up from only US$5.7 billion (€5 billion) last year, according to projections from Digital TV Research.

Advertising will be the key revenue source for OTT services, bringing in over US$8.7 billion by 2021, a US$6 billion increase on the figure for last year. China, which is expected to overtake Japan this year to become the OTT market leader in the region, will account for US$4.9 billion in advertising revenues by 2021, with Japan providing US$1.5 billion.

Premium revenues are also set to rise sharply, with SVoD accounting for over US$6.4 billion in revenues in the Asia Pacific region by 2021. China will contribute US$1.8 billion in SVoD revenues, a sixfold increase on its 2015 total, according to Digital TV Research.

Murray said Netflix “may have to adjust its policy rapidly to secure market share before its rivals become too entrenched” in the region, following its ‘big bang’ 160-territory launch at the start of the year.

While the global SVoD service has achieved success in Australia and New Zealand, said Murray, in other countries its debut was characterized by a lack of local content and a lack of sensitivity to local pricing requirements.