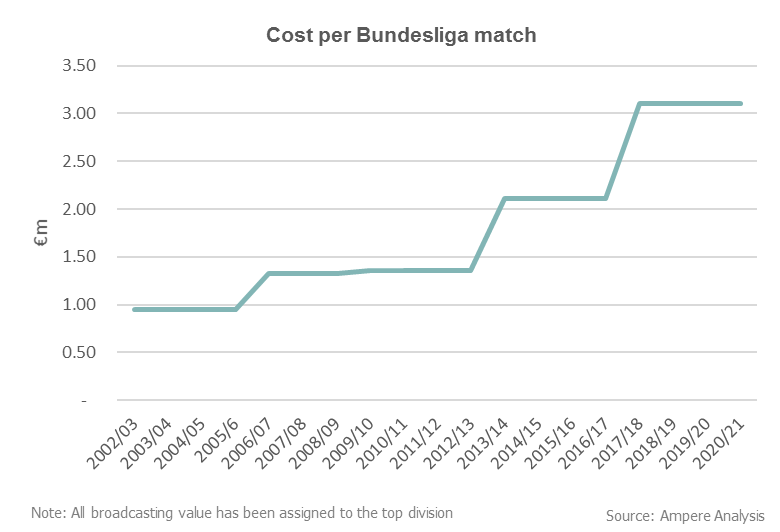 The value of German Bundelsliga football rights is set to rocket to between €3.6 billion and €4.4 billion in the upcoming rights auction, placing a heavier financial burden on pay TV leader Sky, according to Ampere Analysis.

While the value of Bundesliga rights has until now trailed well behind deals secured for English Premier League rights, new bidding rules and enhanced competition in Germany mean that the next four-season deal will take the value of German top-tier football past that of Italy’s Serie A and push it into second place among leading football leagues, according to Ampere.

The group said that it’s best estimate was that pay rights would cost around €713 million per season, with free rights taking the annual total to €950 million, giving an overall value of €3.8 billion to rights for all four seasons to be auctioned.

However, says Ampere, the value of pay rights alone could go as high as €940 million per season, based on the experience of previous bidding competitions in Germany.

According to Ampere, at the lower range Sky could afford to bid for rights without a major increase in the proportion of its programming spend allocated to football. At the higher end the impact would be more significant but Sky is expected to emerge as the major holder of rights in any case, with Ampere judging it “unlikely a new entrant would gain the majority of the rights over Sky”.

Rules imposed by the German Federal Cartel Office, the Bundeskartellamt, mean that Sky will no longer be able to hold all the rights on its own, but it is still expected to control the majority of live rights.

Between 10% and 30% of the 306 matches available are expected to be awarded to an alternative provider. Potential competitors identified by the analysts include Amazon, Deutsche Telekom, Discovery and Perform Group.