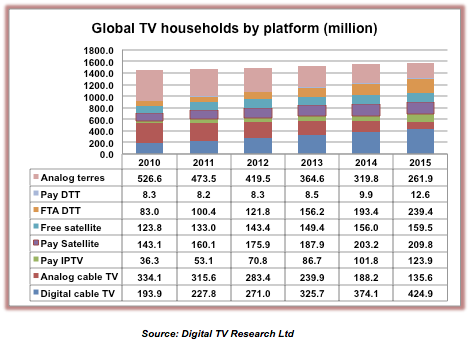 Three quarters of the world’s TV homes are now digital, up from 40% of homes in 2010, according to Digital TV Research.

According to Digital TV Research’s latest Digital TV World Databook, about 584 million digital TV homes were added across 138 countries between 2010 and 2015, taking the number of digital TV households to 1.17 million homes.

Of the homes added over the five-year period, 156 million came from homes taking digital-terrestrial TV only, while digital cable contributed a further 231 million.

According to Digital TV Research, there were still 398 million analogue terrestrial and cable TV households by the end of 2015, down from 863 million at the end of 2010.

The Asia Pacific region contributed 381 million of the additions over the 2010-15 period, taking the digital total for the region to 608 million. China, the largest digital TV nation, had 339 million digital TV homes by the end of 2015.

Global pay TV homes – both analogue and digital – numbered 907 million by 2015, up from 716 million at the end of 2010, with Asia Pacific contributing two thirds of the global additions to take its total to 520 million. Digital pay TV homes numbered 771 million in 2015.

Pay TV revenues amounted to US$206 billion in 2015, up 19.4% on the 2010 figure, according to Digital TV Research, with the US accounting for 10 times the revenues notched up by second placed China.