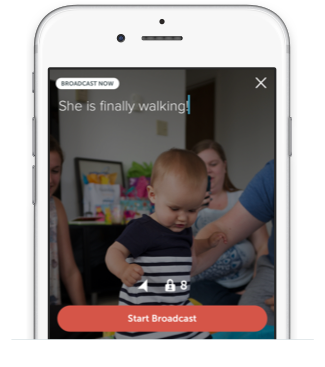 The mobile video streaming service said that the new features would help users to “form communities around the topics they care about and broadcast from new perspectives”.

Periscope users will soon be able to search for broadcasts by title or topic, while video creators will be able to add relevant hastags to their broadcasts to make their videos searchable.

Periscope is also making it possible to broadcast live from supported DJI-manufactured drones via an iPhone.

“Just connect your iPhone to your drone’s remote. We’ll automatically pull in your drone’s video feed and let you switch between it, your iPhone cameras and even your GoPro,” said Periscope in a blog post.

At the same time, Periscope is also beta testing the ability for users to save their broadcasts for longer than the previous 24-hour limit. This offering is also due to roll out in the coming weeks.

“Our goal is to give you full control of your broadcasts. Soon, your broadcasts will be automatically saved on Periscope and Twitter with comments and hearts. Should you change your mind, you can still delete your broadcasts at any time in the post-broadcast screen or in your profile,” said Periscope.