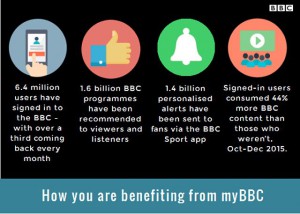 The BBC is due to launch a discovery app called BBC+ in the coming months, as it moves forwards with its content personalisation plans.

In a progress report that comes a year after BBC director general Tony Hall outlined his vision for a more personal BBC, the corporation said that the new BBC+ mobile app will help viewers to discover collections of content from across the BBC.

The corporation will also roll out a new BBC Identity (ID) system that it said will be “more robust and even more secure” than the existing one, and will offer viewers personalised experiences on whatever devices they are using.

Meanwhile, a new ‘privacy hub’ area on the BBC will explain the broadcaster’s approach to data and privacy.

The BBC’s director of homepage and myBBC, Phil Fearnley, said that in the last year 6.4 million people have signed in to the BBC, with over a third coming back to the BBC on a monthly basis to benefit from “personalised signed-in experiences”.

Some 1.6 billion BBC programmes have been recommended to viewers based on what they’ve previously listened to or watched, 1.4 billion personalised alerts have been sent via the BBC Sport app, and in the last three months alone 1.7 million people have personalised the myNews section on the BBC News app and website, according to Fearnley.

The myBBC progress report also revealed that the personalisation tools are also helping the BBC when it comes to commissioning programmes.

“How audiences are engaging can be useful in informing commissioning decisions such as what further programming would help people delve a little deeper into that subject,” according to the report.

Last year Tony Hall said that “the internet age strengthens the case for the BBC” and that the corporation planned to introduce a raft of new features, including better recommendation and personalisation tools.

“We face much greater competition for ideas and talent [today]. BBC services won’t be as prominent in an on-demand world. And younger audiences are using linear channels less than their parents,” said Hall at the time. “There’s real jeopardy here. If the BBC doesn’t address these challenges, we could become irrelevant. But I’m confident that we can deal with them, precisely because each of those challenges is also a huge opportunity.”