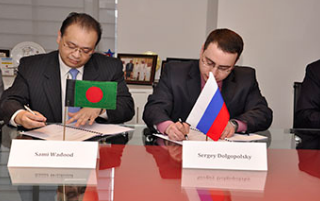 GS Group is providing hardware and software solutions for the service, and acting as system integrator. The company’s digital set-tops include DVR and timeshift functionality and an EPG.

GS Group, which has previously been involved in the launch of DTT-based pay TV service One TV in Cambodia, said it planned to focus on launching digital broadcast services in other promising markets.

“The GS Group’s international broadcast projects are a bright example of Russian high technologies successfully entering the global market. RealVU, the first DTH operator in Bangladesh will bring mass accessibility to high-quality digital television service in a country that has 165 million plus population currently being forced to watch low-rated terrestrial and cable TV or to illegally connect to foreign operators. We expect to engage significant audience in the first year of operating due to GS Group’s vast expertise in managing national broadcast projects, solid cooperation with a local partner, diversified content that meets viewers demands, and a high level of service,” said Sergey Dolgopolsky, PR, GR and IR director, foreign broadcasting projects department, GS Group.