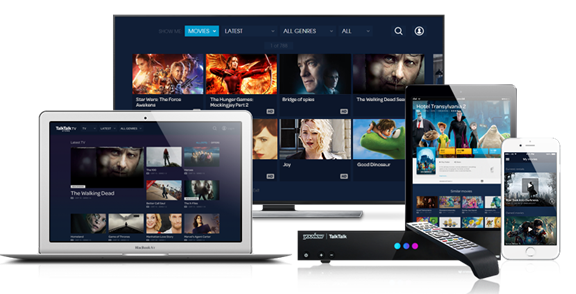 UK telco TalkTalk has unveiled the TalkTalk TV Store, a new pay as you go service offering recent movies and TV shows from £3.45 a month.

The move follows TalkTalk’s acquisition of film and TV streaming service blinkbox. The telco says it has updated the platform to offer more than 7,,000 movies and TV shows, available on multiple devices.

The service is available to TalkTalk customers and non-customers alike. Viewers can watch movies fresh from the cinema or popular TV shows such as The Walking Dead or Suits, without an ongoing commitment

TalkTalk customers can rent or buy a show on their home TV then switch to a mobile device to watch the same show.

Viewers will be able to register up to five devices to their account, and watch one film or programme on their TalkTalk TV while streaming or downloading another on a different device. Additionally, existing TalkTalk customers can access the new service by using their TalkTalk log-in details. At the end of the month, any purchases will be added directly to their monthly bill.

Aleks Habdank, chief operating officer of TalkTalk TV, said: “The launch of TalkTalk TV Store is an exciting step forward in our mission to offer the best film and TV content at Britain’s lowest price. It’s all about choice and flexibility – you can opt for anything from Star Wars to Game of Thrones, only pay for what you watch, and switch easily between devices. It puts you back in control, as you can enjoy all the shows and movies you love on your own terms.”