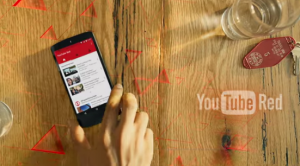 YouTube is going to work on “a lot more original content” throughout the year for its new US subscription service YouTube Red, according to Google CEO Sundar Pichai.

Speaking on the first quarter earnings call of Google and YouTube parent company, Alphabet, Pichai said that the six originals that YouTube has launched so far on Red have been “very well received” and that “early indications are that this is something that’s going to resonate well with users.”

Overall, the CEO said that YouTube still had “incredible momentum” and is a part of the business that Alphabet continues to invest heavily in.

“What seemed like a moon shot a decade ago has grown into a booming community of engaged users, creators and brands, unlike any other video platform. YouTube on mobile alone now reaches more 18-34 and 18-49 year olds in the US than any TV network – broadcast or cable,” said Pichai.

Alphabet said that the continued strength in YouTube and programmatic advertising, increased use of mobile search, and “solid growth” in desktop and tablet search helped the company to post “very strong revenue” of US$20.3 billion in the quarter. This was up 17% year-on-year.

On a GAAP basis, operating income was US$5.3 billion, up 20% compared to the year before.

“Our Q1 results represent a tremendous start to the year with 17% revenue growth year on year and 23% growth on a constant currency basis. We’re thoughtfully pursuing big bets and building exciting new technologies, in Google and our Other Bets, that position us well for long term growth,” said Porat.