Number of digital TV homes to climb by 120m this year 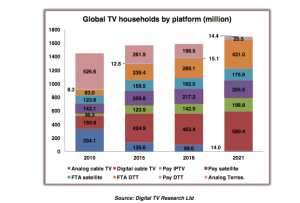 The global number of digital TV households will climb by 120 million homes this year alone, according to Digital TV Research.

Asia Pacific is tipped to account for almost two-thirds of the 497 million global digital TV household additions between 2015 and 2021, while Sub-Saharan Africa will more than double its base over the same period.

The number of digital TV homes in Eastern Europe will triple between 2010 and 2021 and almost double in Latin America, according to the study.

Pay TV penetration at the end of 2021 will range from 80.3% in North America, where the figure is slowly falling “as cord cutting makes a limited impact”, to 24.2% in the Middle East and North Africa, said the study.