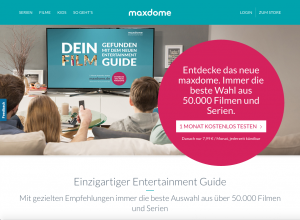 ProSiebenSat.1-owned German video-on-demand provider Maxdome is launching a curated service as the third leg of its three-stage project to refresh the offering.

Users of the on-demand service will now be presented with top lists, thematic collections and editorial recommendations in addition to automated recommendations generated by algorithms.

The editorial recommendations will be updated daily by an editorial team led by Thomas Weiss, previously the deputy editor of listings magazines Hörzu and TV Digital.

Other figures on the team include sports expert Christine Theiss, singer Stefanie Heinzmann, chef Nelson Müller and TV presenter Colien Ulmen-Fernandes, who is also the brand ambassador for the Maxdome service.

The latest move follows an expansion of the range of content available on the service, including deals with Walt Disney, Sony, Paramount and Tele München Group bringing over 800 new series and feature titles to Maxdome users.

Maxdome also moved to strengthened its distribution via deals with cable operators Unitymedia and Tele Columbus. Other partners include drugstore chain Rossmann, which will provide Maxdome gift certificates in its 2,000 stores from Many2. ProSiebenSat.1 has also struck a deal to distribute the service via Amazon Fire TV and the Amazon Fire TV stick.