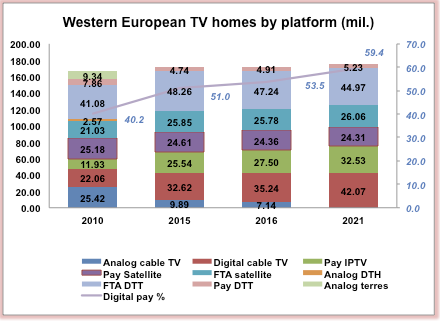 According to the research outfit, IPTV subscriptions in western Europe, which totaled 25.54 million at the end of last year, will grow by seven million between 2015 and 2021 to reach 32.53 million, while the number of pay satellite homes, which numbered 21.61 million for 2015, will decline by about 300,000 over the same period.

IPTV revenues meanwhile are forecast to rise by US$1.2 billion (€1.05 billion) to reach US$5.77 billion in 2021. Satellite revenues are forecast to fall by US$1 billion over the same period.

According to Digital TV Research, the decline in pay satellite is down to operators, particularly in Spain and Italy, converting satellite customers to more lucrative multi-play bundles on their fixed-line networks.

While this represents an increase of 6.9% overall, the number of digital pay TV subscribers will grow faster – by 19%. However, analogue cable customers on basic packages are likely to prove resistant to converting to more expensive digital packages and pay TV revenues are forecast to remain flat at around US$31 billion, led by the UK, with revenues of US$7.217 billion by 2021.

Pay TV revenues in Germany are forecast to reach US$4.183 billion, despite that country having more pay TV subscribers than the UK.

Simon Murray, principal analyst at Digital TV Research, said: “The remaining analog cable TV subs are the most obstinate. These homes have had several years to transfer to digital platforms – including those from their existing operators, but are still holding out. When conversion finally happens, these homes are more likely to convert to free-to-air platforms such as DTT or satellite than their predecessors.”