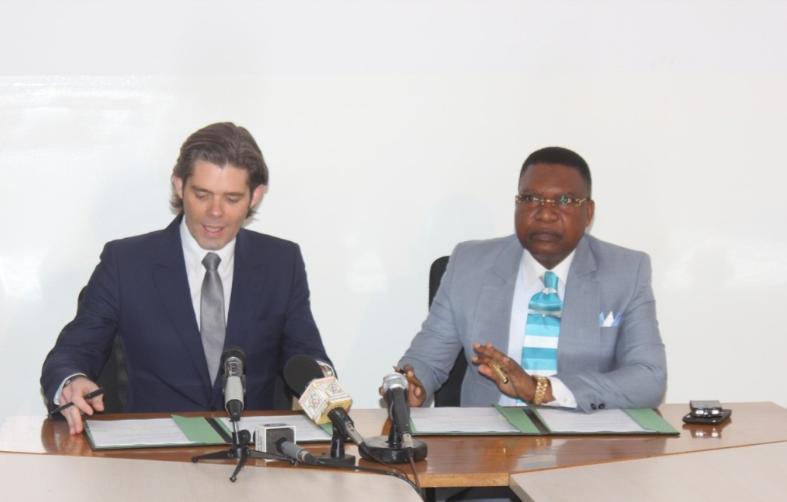 Michael Peters, CEO of Euronews, with Jean Obambi, Managing Director of Télé Congo, at the signing of the pair’s partnership.

Euronews’ sister TV channel, Africanews, is due to launch across sub-Saharan Africa on April 20, following the launch of the network’s news website in January.

At a press conference at MIPTV in Cannes today, Euronews’ director of distribution Arnaud Verlhac said that the pan-African news channel will be broadcast by SES via its SES-4 and SES-5 satellites.

The channel will be available via Canal+ Afrique across 25 countries via satellite and DTT as part of its ‘Bouquets de Canal+’ packages. Startimes will also carry the network via DTT and satellite in the nine countries where it currently provides service.

Other operator deals announced today were with Zuku, which distributes more than 100 channels across East Africa via satellite, and in parts of Kenya via cable. Africanews will also be carried via Nigerian IPTV service Suburban.

At launch, Africanews, which is 100% owned by Euronews, will be available in some 7.3 million homes across 33 African countries, according to the company.

Speaking at the press conference, Euronews CEO Michael Peters confirmed that new channel is part of a wider plan to offer more regional offerings, in answer to a question about whether Euronews was now planning projects such as an Asianews or an Americanews channel.

“We are in discussions with some partners now. Yes we have this project to launch new regional media offers. I think that this goes into this strategy of ‘All Views’ and not imposing one brand. I think that this is, philosophically, something important for us.

Peters also stressed that Africanews “is not Euronews Africa” with some 90% of the channel’s output to be African content, with Africanews now employing 85 media professionals across 15 countries in sub-Saharan Africa.

“We are not coming to Africa to give the point of view of Europeans to Africans,” said Peters. “We bring our expertise in terms of producing quality content.”

The Euronews CEO said that the focus on pure African content marks a change in the original strategy for the delayed Africanews, which was due to launch in January.

Initially the company planned to programme the channel with 80% Euronews-originated content and 20% Africanews, with that split to be reversed gradually over a period of five years.

However, Peters said he quickly realised that this would not be possible as it would lead to the “cannibalisation” of Euronews, with Africanews now positioned well to sit alongside and co-exist with Euronews.

Separately, Euronews used the press conference to also announce a new look for the Euronews channel on 17 May, around the new brand claim “Euronews, All Views.” This day will also see the beta launch of the new Euronews.com website.