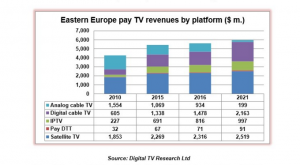 Pay TV revenues in central and eastern Europe are continuing to grow but at a much lower rate than in previous years, according to Digital TV Research.

Pay TV will be taken by 62.3% of the region’s TV homes in 2021, amounting to 80.05 million homes in total, according to Digital TV Research’s principal analyst Simon Murray. While this figure amounts to an increase of 20 million on the 2010 figure, it is less than one million up on the 2015 figure.