Turner leads US$15m round in Mashable, partners on video production 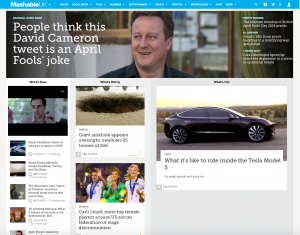 Turner has led a US$15 million funding round in digital media news site Mashable, which plans to use the cash to expand its video output across all platforms – including linear TV.

The Series C investment includes a partnership for video production, technology and advertising opportunities between Mashable and Time Warner-owned Turner.

Mashable said that it plans to enhance its proprietary technology and data platforms, and bolster its premium ad offerings, with a “focus on growing the company’s branded video division.”

As part of the deal, Kevin Reilly, chief creative officer for Turner Entertainment and president of TBS and TNT, will also join Mashable’s board of directors.

“The most exciting thing right now is the future of TV. Turner, home to the top rated cable networks, is the perfect partner to bring the best of tech and digital culture to TV in fresh ways. Kevin Reilly is a creative visionary that will be a huge asset as we continue to grow as a global entertainment brand,” said Mashable founder and CEO, Pete Cashmore.

Commenting on the investment, Reilly said that Mashable is “redefining digital storytelling” and is an ideal partner for Turner as it aims to innovate “beyond the traditional television universe.”

“We’re confident our partnership will increase the cultural relevance of Turner and Mashable content across all of our platforms,” he said.

In the past year Mashable claims to have more than doubled its video production and said its platform video views grew by over 400%.