Deloitte: nearly half of Americans now use SVoD 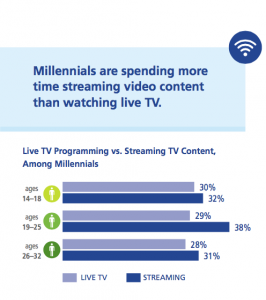 Some 46% of Americans now subscribe to streaming video services, with millennials aged 14-25 spending more time streaming than watching live TV, according to Deloitte.

The professional services firm’s tenth ‘Digital Democracy Survey’ claims that more than half of all consumers and three-quarters of millennials watch movies and TV shows via streaming on at least once a month.

“The proliferation of online content shows no signs of slowing down and the consumer appetite to consume content is equally voracious,” said Deloitte vice chairman and US media and entertainment sector leader, Gerald Belson.

“The survey data indicates that consumers are more willing than ever to invest in services to watch whenever, wherever and on whatever device they choose.”

The survey also said that more than 90% of US consumers are now multitasking while watching TV with millennials engaging in an average of four additional activities while watching TV – primarily surfing the internet, using social networks and text messaging.

The report claims that 33% of all consumers typically browse the web while watching TV, while fewer than 25% of consumers’ multitasking activities are directly related to the program being watched.

US viewers were also found to be keen ‘binge watchers’ with 70% of US consumers binge watching an average of five episodes at a time, and 31% bingeing on a weekly basis.