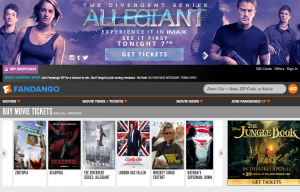 Comcast-owned movie ticketing firm Fandango is to launch a transactional VoD service on March 30 after acquiring the M-GO platform earlier this year.

US-based Fandango will rebrand M-GO as FandangoNOW, which will offer “massive library of new release and catalogue movies from all major studios and next-day TV shows for purchase and rental”.

FandangoNOW, billed as Fandango’s “first-ever premium on-demand service”, will be offered across the web, iOS, Android and Roku devices, as well as Samsung, LG and Vizio smart TVs.

This comes after Fandango, which is part of NBCUniversal parent Comcast, bought M-GO from DreamWorks Animation and Technicolor

“The launch of FandangoNOW is a huge milestone for the company, as we aim to deliver the best movie experience anytime and anywhere, across the total movie lifecycle,” said Fandango president Paul Yanover. “We’re especially thrilled to launch FandangoNOW in time for 2016’s most anticipated in-home debuts, including 2015 blockbusters and Oscar contenders, for which we sold millions of tickets during their theatrical release.”

Later this year, Fandango will introduce movie ticket and home entertainment products, which will allow customers to pre-order digital downloads of movies they plan to see, or downloaded previous franchise instalments before newer movies hit the cinemas.

Fandango recently announced the acquisition digital movie brands Flixster and Rotten Tomatoes, which, added to FandangoNOW, will mean “the most comprehensive resource for best-in-class movie information, theatrical ticketing, video content for movie discovery and home entertainment”, according to the company.

Going by comScore stats from December 2015, this will increase Fandango’s audience reach to more than 63 million unique users per month.

The launch of FandangoNOW comes at a crossroads for the movie industry, which had been significantly hit by illegal downloading.

Netflix and Amazon Prime Instant Video have both played with the traditional theatre window by acquiring and financing their own exclusive movies, while Napster founder Sean Parker this month revealed The Screening Rom, a controversial premium VOD service that would see films released digitally at the same time as their cinema release.