Ooyala: Mobiles and tablets account for 46% of online video viewing 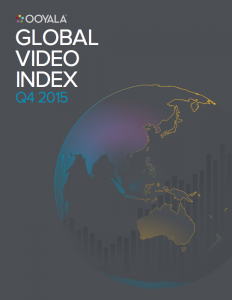 Mobile phones and tablets combined now represent 46% of all online video viewing across the world, according to Ooyala’s Global Video Index Q4 2015.

“Since 2011, mobile video plays – smartphones and tablets combined – have a compound annual growth rate of more than 116%. That pushes the share of mobile video plays up a stunning 2,084% over the past five years,” according to the report.

The smartphone has been the biggest driver of mobile video, with video consumed on these devices more than six-times as often as tablets in Q4 2015, said Ooyala.

“The analysis from the recent Video Index shows the convergence of multiple factors in the market – from regional mobile adoption, consumer behaviours on specific devices and buying preferences between publishers and their advertisers – and gives a macro view of new trends in the industry,” said Chief Executive Officer of Ooyala, Ramesh Srinivasan.

“Quarter after quarter, the opportunity to build more lucrative and successful businesses with video becomes clearer as mobile-first strategies continue to grow in importance.”