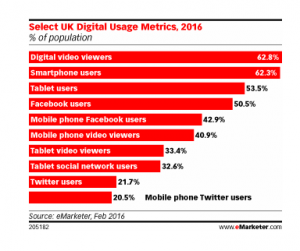 More than three-fifths of the UK population now consume online video on a regular basis, according to eMarketer.

The research firm said that the number of people in the UK who watch streamed or downloaded digital video content via any device – at least once a month – this year stands at 41.3 million, or 62.8% of the population.

According to eMarketer, even though digital video viewing is becoming increasingly popular, “such digital behaviours aren’t necessarily eating into TV time by much.”

In 2016, UK adults will spend an average of 3 hours 8 minutes viewing TV content on a television set – more than any other single media activity – according to the stats.

dHowever, mobile media time – including watching video among other activities – is tipped to pass TV viewing time next year at 3 hours and 12 minutes, compared to TV viewing’s 3 hours 6 minutes.

“Much consumption of this type of content happens via the TV set, but smartphone video viewing is on the rise, and this is one of the key drivers adding to total video viewing time in the UK. The message for marketers is that more viewing time on more devices equals more opportunities.”