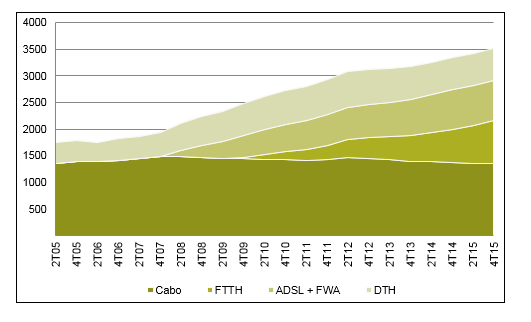 Pay TV penetration in Portugal stood at 86.6% at the end of last year, up 4.1 percentage points on 2014, according to figures compiled by regulator Anacom.

Growth was led by fibre-based offerings, which now have over 185,100 subscribers, representing 23.1% of all subscribers.

Cable remains the leading distribution technology overall, with 38.3% penetration, but the overall cable based declined by 1.4% over the previous year.

About 87.8% of pay TV subscribers took their service as part of a converged package.

Total revenue from standalone and bundled pay TV services reached €1.662 billion in 2015, according to Anacom.

Nos remained the leading player in the market, with a share of 43.8%, followed by Meo with 40.7%, Vodafone with 10.2% and Cabovisão with 5.1%. Vodafone was the only player to increase its share.