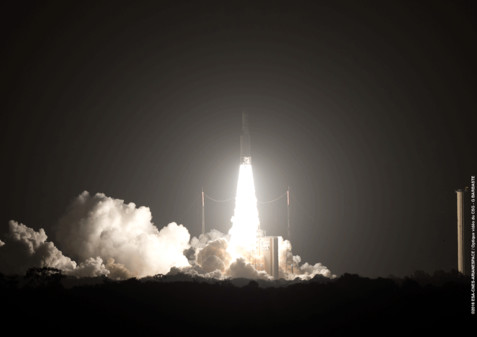 Eutelsat 65 West B takes to the skies

Eutelsat’s 65 West A satellite for Brazil and Latin America has been successfully launched on board an Ariane rocket from Kourou in French Guiana.

Following performance tests, Eutelsat 65 West A will enter full commercial service at the 65° West slot in early May.

The satellite has Ku-band, C-band and Ka-band capacity, with a Ku-band payload to serve DTH reception in Brazil and corporate connectivity across Brazil, Central America, and Andean region and the Caribbean. C-band coverage will be used for cross-continenatal video contribution and distribution, while a multi-spotbeam Ka-band payload will promote broadband access across Latin America, notably Brazil, Mexico, Colombia and Peru.

The satellite will be followed into orbit in a few weeks by the all-electric Eutelsat 117 West B satellite that will be located at 117° West to boost capacity for Latin America broadcast markets.

Separately, Stargroup, the parent company of StarTV, Mexico’s new DTH platform, has struck a multi-year agreement with Eutelsat Americas for Ka-band capacity on Eutelsat 65 West A. Stargroup will use the capacity to power its new StarGo broadband platform.

Rodolphe Belmer, CEO of Eutelsat, said: “The launch of Eutelsat 65 West A is a new milestone in the expansion of our Americas footprint. Through a combination of coverage zones and frequency bands it is uniquely placed to respond to the varying requirements of a diverse range of clients. Our thanks go to Arianespace for another flawless ride into space, our 31st by Ariane, and to SSL for its advanced delivery of a sophisticated satellite programme.”