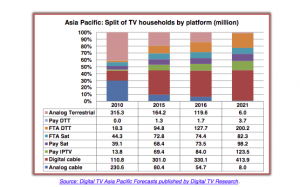 The number of paying IPTV subscribers has overtaken the number of satellite TV customers in the Asia-Pacific region, according to a report by Digital TV Research.

According to the fifth Digital TV Asia Pacific Forecasts report, the region’s IPTV total will reach 123.5 million by 2021, with China accounting for 78.4 million of those.

The number of digital cable homes will rise by 113 million over the next six years, with analogue cable losing 72 million. Pay digital satellite will add 30 million homes, with free-to-air satellite adding 10 million.