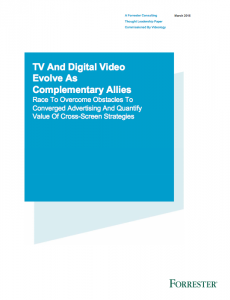 Non-linear viewing of content is set to continue to grow over the next three years, but it is not as likely to cannibalise linear TV viewing as in recent years, according to new research.

The Forrester report, commissioned by converged TV and video advertising firm Videology, claims that in 2016 buyers and sellers are still projecting growth for digital video, but their outlook on linear TV has improved.

Based on a survey of some 100 people from US advertisers, agencies, and media companies – including both traditional and online-only video content producers – almost half (49%) said they think consumers will spend more time watching TV at the time it is broadcast over the next three years.

Some 73% of buyers and sellers predicted that consumers will stream more full-length shows online from networks and over-the-top services, and 70% said people will spend more time with original online professional programming. However, the report claims that these online sources are “set to complement, rather than replace, linear TV.”

“Despite tremendous growth in alternative viewing options, TV is not going away,” said Scott Ferber, chairman and CEO, Videology.

“The future of video advertising is not about a one-way shift to digital video, it’s a holistic approach to all screens. The lines between TV and video are all but indistinguishable to consumers, and the most successful advertising will take that same approach.”

“Interestingly, this outlook on linear TV has improved from 2013. In our prior study, only 27% of buyers and sellers thought consumers would spend more time with linear TV in the future,” according to the study, which is titled ‘TV And Digital Video Evolve As Complementary Allies’.

The study also found that 72% expect video buying to become more programmatic in the next three years, 71% think advertisers will shift dollars from linear TV to digital channels in the coming years and 76% believe technology will be a crucial component for success.