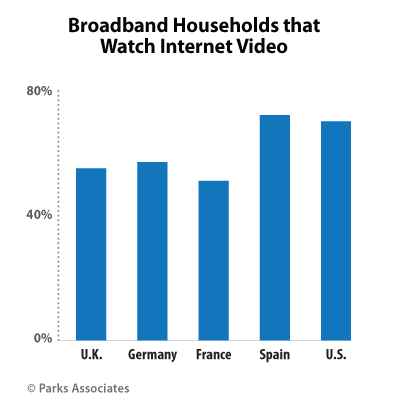 Some 16% of Spanish pay TV households subscribed to pay TV for the first time last year, despite high incidences of ‘cord shaving’ and ‘cord cutting’ among broadband households, according to Parks Associates.

The research firm said that first-time adoption of pay TV is up among Spanish broadband households, as is the penetration of pay TV overall.

However, Spanish consumers were also more likely than consumers in other Western European markets to have either never had pay TV or to have cancelled pay TV in favour of online video sources.

“The Spanish pay TV market in general has a very active, cost-conscious base of subscribers, with higher-than-average rates of downgrades and upgrades and a substantial population of cord-nevers,” said Parks Associates research director, Brett Sappington.

The research said that Spain exceeds the US in percentage of cord cutters and broadband households that watch online video. In other surveyed countries – the UK, France, and Germany – the incidence of cord cutting is far lower than in the US, according to Parks.

“The percentage of consumers in the UK, Germany, and France cancelling pay TV services and instead using online video is half the rate seen in the U.S. market,”  said Sappington.