A fifth of UK web users have turned to ad blockers 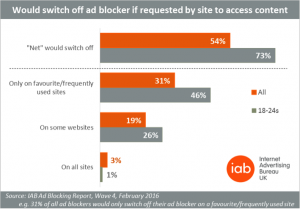 Some 22% of online British adults currently use ad-blocking software, according to new research by the Internet Advertising Bureau (IAB).

The February survey, commissioned by the IAB and conducted by YouGov, found that the proportion of people using ad blockers had climbed from 18% in October 2015.

The report found that 54% of ad blocker users would switch off the software if a website said that was the only way for them access content, a figure that rises to 73% among 18-24 year olds.

Ad blockers were also used most on laptops and PCs. Among those currently using ad blocking software, 72% are doing so on laptops, 41% on desktop PCs, 26% on smartphones and 21% on tablets, according to the survey.

“The IAB believes that an ad funded internet is essential for providing revenue to publishers so they can continue to make their content, services and applications widely available at little, or no cost. We believe ad blocking undermines this approach and could mean consumers have to pay for content they currently get for free,” said IAB UK’s CEO, Guy Phillipson.

The IAB is the trade association for online and mobile advertising that promotes growth and best practice for advertisers, agencies and media owners.