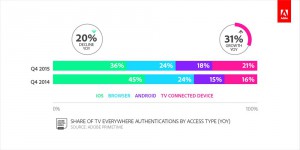 TV everywhere consumption is “slowly moving toward” connected devices like Apple TV and Roku boxes, according to new research by Adobe Digital Index.

The study said that for the quarter iOS devices accounted for 36% of TVE authentications, the browser accounted for 24%, connected TV devices 21%, and Android devices 18%.

Overall the TV everywhere share of active monthly pay TV users stood at 17.4% in Q4, compared to 12.8% for the same quarter a year earlier.

Adobe Digital Index’s research is based on the analysis of anonymous, aggregated data from over 5,000 companies around the world that use the Adobe Digital Marketing Cloud to get data and analysis of activity on websites, social media, and advertising.